James 'Jim' McGill was born in 1920 in the townland of Ballinlea near Ballycastle on the North Coast of Northern Ireland. He attended Ballinlea Public Elementary School just a few hundred yards from where he was born. When he left school he attended Ballycastle Technical School where among other things he studied woodworking and made several items of furniture which were still in use in his own home until the day he died. In his youth he learned to play the fiddle and took lessons from a local fiddler, Sam McFarland. (Sam was a Ballinlea shoemaker who lived at Straid for a time, but moved back to Ballinlea after he got married. He was a fiddler and also gave lessons (Dan McHenry, Kilmahamogue) (http://northantrim.proboards84.com/index.cgi?board=namusicians&action=display&thread=138 ).

For a few years he played in a local Caeoli band until he met and married our mother,

Brigid Cochrane from Dunloy, in 1948. About this time he bought a small farm which he and our mother farmed until he retired. During this time the fiddle was left on the top of the wardrobe only to be taken down when uncles or cousins came to visit. A few notes would be 'screeched' out and a good evenings entertainment had before the fiddle was returned to the top of the wardrobe until the next time.

When he retired from farming, through ill health, the fiddle was brought down from its resting place on the top of the wardrobe and he re-taught himself to play it again. Many nights were spent in the 'Good Room' screeching out notes on the fiddle. Gradually the screeching became more and more recognisable as music. Soon he was playing Reels and Polkas as if he had been playing all his life. Many a night he sat listening to Irish Traditional Music on R. T. E. Radio and when a tune came on that he liked he would tape it so that he could learn it.

When he gained enough confidence he joined the local branch of the Comhaltas. Along with other local musicians, Dominic McNabb and Leo 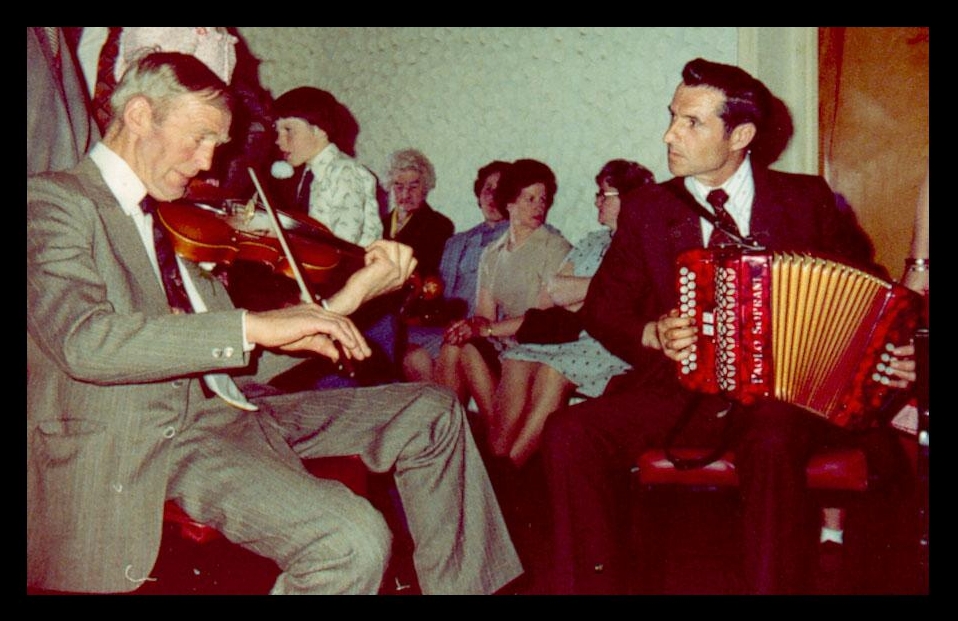 Brown, he played in the local pubs in Ballycastle and at the Lammas Fair.

Then one day he was approached about teaching a child to play the fiddle. He took on the task but little did he realise at the time that he was about to start a great revival in Irish Traditional Music in the Ballycastle area. The one pupil soon became two and then three and so it went on. All of the children were taught in their own homes where they would feel more confident and relaxed. At the height of his 'Teaching Career' he was out every night of the week as well as Saturday and Sunday afternoons in someone's home teaching some child to play his beloved Traditional Irish Music. This was all done because of his love for the music. He never accepted or charged any fee for the lessons. All he wanted was enough to cover his petrol costs. He never wanted for socks or ties or handkerchiefs because at Christmas there was always something for 'Jim' below so many Christmas trees round Ballycastle. Even when people went on holiday 'Jim' was always remembered and something was brought home to give to him at the next lesson.

He had started to write a few simple tunes for some of the children, such was his dedication to them. One of his grandchildren asked him to help him to write a piece of Traditional Irish Music for school. As always he agreed to help. However things were to change drastically.

One morning he was rushed to The Royal Victoria Hospital in Belfast, after a short illness, where he underwent major surgery and was in intensive care for several days. When he was strong enough he was moved to a recovery ward but he was not the 'Jim' and Father we all knew and loved. He had changed. His mind was back in the past. He did not know us when we visited him. We took turns sitting with him at night to help the nurses and so that there would be someone he knew there should the 'Jim' we knew come back.

It was Saturday night and I was sitting with him. Nothing was any different from any other night. He tossed and turned, ranted and raved and was in and out of bed. Eventually he fell asleep. I dozed off in the chair beside his bed. My sleep was not deep that night and I was awakened by the nurses doing what nurses do on the wards first thing in the morning. Dad was still sleeping. I wakened him for his breakfast when it came round. I could hardly believe it. Dad was back.

During his 'time away' we had talked to him about things he knew and loved especially his music. So soon after he had finished his breakfast I reminded him that he had promised to help his grandson write a piece of music. He wanted to do it there and then so I went to the hospital shop to get him a note pad and a pencil. When I returned to his bedside he was sitting up silently whistling. Dad was really back. In no time at all he had written down the tune which he had been silently whistling.

He had to take things very easy for a while after he was discharged from hospital. He was not allowed to drive or do anything which might hinder his recovery. Eventually he felt well enough to start playing the Fiddle again and after some time he felt confident enough to resume his fiddle lessons, much to the delight of his students.

One evening, a few months after he had started his lessons again, he was getting ready, as usual, to go out to one of his students, a young girl, when he collapsed and died. The illness which had so nearly taken him before had recurred and Dad was gone.

However all was not lost. A Scotsman by the name of Dick Glasgow came on the scene. Dick an accomplished traditional musician playing several instruments including Jim's beloved fiddle saw the need for someone to step into Jim's shoes and carry on where he left off. Soon Dick was teaching the fiddle to the local children and founded the 'Jim McGill School of Traditional Music' in Ballycastle.